War Cults of the Southron Reaches Preview - The Bloodied Brotherhood

Another preview of War Cults, this time a full Cult! Ares is a fairly typical God of War, but the real fun comes from dealing with the fallout from having his Cult in your town... 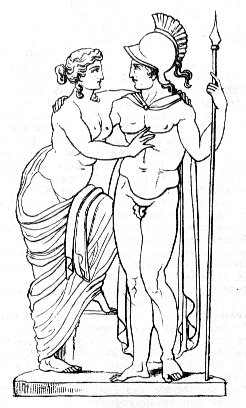 Ares is the God of War, Bloodshed and Violence. A Chaotic being of great mirth and deep, sullen depressions, He represents the chaos of the battlefield and the subjugation of enemies. His worship is somewhat limited – his Chaotic aspects don’t tend to attract much respect outside of wartime.

His followers are a violent lot – more interested in strength of arms and the rush of battle than anything else, even their own safety. The rites and rituals of the cult are often linked with bacchanalian drinking sprees, bloodsports and animal baiting. Those cities which host full-time Ares Cultists accept their presence with a grimace – while they are known for their excesses and property damage, they are also fantastic when the city requires defence, or to create a sense of security during times of unrest.

The warriors recruited by Ares’ Cult are normally at peak physical strength – able to use weapons as tall as they are with ease, and take blows that would outright kill lesser men. In some of the City-States of the Southron Reaches, children as young as three are chosen from suitable parents and inducted into the Cult to be trained as warriors. They undergo intense physical training and religious indoctrination to make them the perfect servants of the Bloodied God.

Many warlike humanoids (mainly orcs and hobgoblins) will create altars to Ares after encountering his Cultists, and humanoid priests of the Bloodied God are not uncommon. And indeed, any blood shed in his name grants some measure of power – while rare, there are a few full-blown Clerics of Ares amongst the Orcish tribes of the Firgian Wastes.

Rites
Ares calls for his followers to be ready for battle at all times, and his Rites reflect that. He has no set days of worship, nor times dedicated to him – the chaos of battle can strike at any moment.

Bloodsports – the Bloodied Brotherhood takes part in ritualised fights to first blood between members. These fights can have a number of stipulations, ranging from specialised weapons (cestuses, short swords and clubs are popular options), styles (pankration, blind-fighting and with certain limbs bound) and specific win conditions (first to hit the floor, first to make a sound, last man standing), between anywhere from two to a dozen combatants. Casualties and deaths are frequent, but healing magic goes a long way to making sure they are able to continue to serve the Cult. These bloodsports are also used as a form of trial and execution for crimes against the Cult – fighting to the death. If the accused survives, they are allowed back into the fold, their crimes forgiven – Ares clearly holds them in high regard.

Bloodletting – for those members of the Cult who are considered extreme even by the low standards of the Bloodied Brotherhood, the Cult allows them to release some of their rage via controlled bloodletting. While in mad, drug-induced frenzies, the Cultist is tied to a sacrificial altar, made of dark polished stone with channels designed to collect any spilled blood. Symbols of Ares, conquered foes and other esoteric symbols are carved into the flesh of the Cultist, letting out their hot rage and excess blood. This blood is collected, to be painted onto the faces, bodies and weapons of other Cultists before battle to grant them the rage of their fellows.

Baiting – while the Cult used to perform animal sacrifices to Ares, they noticed He seemed more likely to grant them his favour when the animals were given a chance to fight back. Much like the bloodsports, these battles are either between a Cultist and a beast, or between beasts themselves. While some of these beasts are locally sourced (wolves bears, owlbears and giant vermin being favourites), the High Priests will occasionally pay for some more exotic fare for the Beast Pits.

Xephos, Head Priest of Ares
Xephos is a giant of a man, standing seven feet tall, broad as a bear and muscled like a bull. Dark black ringlets run down to his shoulders, framing a face that looks like it might have been chisled from granite. Like many Southrons, he is frequently found nude – however, he is known for wearing the pelts of beasts he has slaughtered in the arena as headdresses and cloaks. He also maintains his nudeness even when socially unacceptable, such as during official events or political meetings. Of course, no-one calls him out on this, as his station means he could get away with slaying just about anyone with no repercussions.

Despite the scarred nature of his fellows, Xephos does not bear a single scar on his body. While some claim he uses magical healing to maintain this appearance, most assume it is from his prowess in battle.

Much like his God, he is a man of titanic mood swings – one moment in a deep melancholy for having no equal to battle, the next a crimson rage so deep as to terrify even his closest clergy, to being the happiest man in the room. He is truly unpredictable, and a truly terrifying enemy.

Deathdealer Mercenaries
The Bloodied Brotherhood are also famous for selling their services as mercenaries, to raise funds for the Cult and find new and creative ways to murder people for their God. Mostly, they are hired by the Southron City-States during skirmishes or as a defending force from external invasions, but some will sell their services to other kingdoms, even travelling far across the world to spread the word of Ares and earn both money and renown for themselves and their God. While these travelling mercenaries will wear leather armour to keep with local traditions, they will revel in any opportunity to remain nude as they would back home. Of course, this can make them somewhat notorious in some areas.

Plot Hooks
The weekly Beast Fights have gotten out of hand, and a creature has escaped to wreak havoc within the city!

The Pitmaster is looking for a new beast for the Beast Pits, and is offering top dollar for something interesting. While out drinking, you hear tales of a particularly mean old Owlbear nesting somewhere nearby…

Two recently-joined Acolytes of the Bloodied God have been causing trouble, throwing their weight around. A few concerned citizens have asked you to deal with them quietly and respectfully (no-one wants retribution from the Bloodied Brotherhood).

Recent attacks by humanoid tribes are being led by Orcish Clerics of Ares. Might the Cult be able to use their standing to begin parlay with the invaders, or even bring them on side?
Posted by Ian Coakley at 09:53 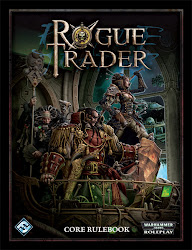 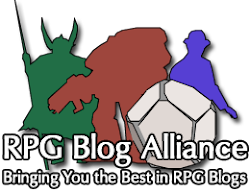